Editor's note: On Friday night, the Mustangs played a tough game but fell to St. Pius X-St. Matthias Academy, 46-43. See DigMB Instagram for our video showing the crowd's appreciation for the team.
Mira Costa High School's football team plays host tonight to a playoff game that could result in the Mustangs' first appearance in a CIF Southern Section finals game since 2009.
The Mustangs have been on a roll in the playoffs, with the team scoring at least 30 points in five consecutive victories, two in the playoffs. Last week, the Mustangs romped to a 41-14 home victory over Alta Loma.
The current streak marks a dramatic comeback from a rough patch that started in late September, when the team suffered a close loss to Loyola (34-31), and scored just 9 points total over the next two losses.

But the Mustangs have turned it around, bringing new energy and excitement into the playoffs.

The offense is led by QB Casey Pavlick, whose main targets are Cole Crotty (2 TD catches last week versus Alta Loma) and seniors Van Graw and Riley Blomstrand. The running game is headed by the "thunder and lightning" combo of Matt Kraskouskas and Dean Repetti (2 TD last week, pictured above scoring in the first playoff game versus Pacifica/Garden Grove). 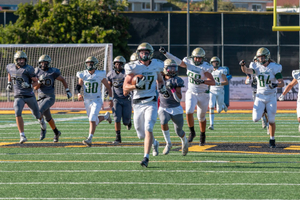 The defense has rallied behind senior middle linebacker Brett McCalla, limiting potent offenses in each of the last two games to just 14 points each. (McCalla is pictured here running back a pick-6 interception versus Peninsula last month.)

Awaiting the victor in Friday's contest will be the winner of the other Division 7 semifinal, which features Pasadena and Aquinas, also Friday night.

Costa is already playing deeper than some local rivals. Palos Verdes lost in the first round to Cypress, and Loyola was defeated last week by Etiwanda.