The Mira Costa High School Marching Band and Colorguard on Saturday earned first place at the Southern California Regional Championships for the Western Bands Association. The groups also came home with the awards for High Music and High Effect.

The first-place award is a "first" for Mira Costa, representing the most significant competitive placement the Marching Band and Colorguard has ever achieved. Mira Costa took the crown from among eight marching bands in its division. (A video of their performance can be seen below.)

"Last year the MCHS Marching Band and Colorguard season was canceled due to Covid-19, but this year they came back, worked so hard, and all of that effort paid off," said Cathy Oh, co-president of the MCHS Bands booster board. "Our students were overjoyed."

Oh added that band director Joel Carlson and his staff deserve a "big shout-out" for their "persistence, amazing attitude, and talent."

"Also, a huge thanks go to our parent volunteers, including the VPs of Marching Band/Colorguard Operations Carolyn Mukai, Tina Shivpuri, and Cori Rytz," said Oh. "It literally takes a village to get 76 Marching Band and Colorguard members through a season and Mr. Carlson and these parent volunteers spent countless hours to do just that."

Those who wish to see the groups perform will have two more chances before winter break.

The Mira Costa Parade Team will be participating in the Hollywood Christmas Parade on Sunday, November 28. This year's parade will be presented live at 6:00 p.m. and it will also air nationally on The CW Network on Friday, December 17.

To see the parade in person, spectators can purchase tickets for the grandstand online, or grab a chair and blanket and come watch the band along the route. 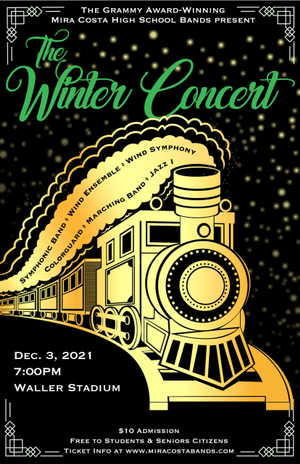 The concert will feature the Parade Team, the MCHS Marching Band & Color Guard, the Emmy-Award-winning Concert Bands, and Jazz Band.

Tickets for this family-friendly event are $10 for adults; and students and seniors are free. All ticket sales go towards the MCHS Band Programs.

Tickets are available at https://miracostabands.com/.